This article is about Wrath (Character). For Wrath (Skill), see Ruler Skills.

Episode 8: Am I, Dead? (Kyouya Sasajima)

Wrath, formerly Sasajima Kyouya (笹島京也), is one of the students reincarnated from Japan. He was reborn as a goblin enslaved by Humans until he awoke the Wrath skill and subsequently went on a rampage, evolving into a Oni in the process. Fortunately, Shiraori and her companions saved him and he joined their cause, eventually making his way up to 8th Demon Army Commander.[1]

In his previous life, Kyouya was stated to have a very similar face to his reincarnated self and described as a boy with shorter than average height.[2] In the anime, though he is depicted to be taller than average instead.

As an Oni, Wrath has red eyes[3] and multi-layered hair colors of silver and dark green. He looks similar to that of a human, however, he has a pair of horns sticking out of his forehead and fang-like teeth. He is also taller than an average human.

Oni are a unique humanoid monster species, evolved from an Ogre General. Evolving into an Oni raises the individual's level of Taboo, while decreasing their size to that of a standard human. Oni are solitary individuals, unlike ogres, and do not form communities or raiding parties with other ogres.

On Earth, Kyouya was a self-righteous, kind high school boy who could not stand bullies, often standing up to them for his own view of what is "right," even if it resulted in violence. He was nicknamed "little ogre" by his peers in junior-high due to his constant use of violence and small stature. In high-school he was able to endure minor bullying of others and become friends with Shunsuke and Kanata, often playing games with them together.[5] After being reincarnated as a goblin, he was getting comfortable with his new life when disaster struck and he went through many hardships, to the point that his personality and worldview completely changed.

During his enslavement under Buirimus, Kyouya went through inhumane treatment and was forced to constantly make weapons using his unique skill, all while seething in fury towards his captors.[6] He eventually reaches a threshold of rage, resulting in him changing his name to Wrath, the name of the ruler skill that he gained as a result of holding onto his rage for years on end.[7] It takes a long time for him to regain his composure with the help of Shiraori, Ariel, and Sophia.

During the effects of the Wrath skill he will turn into a furious rampaging monster, abandoning common sense and the ability to control his actions. He describes it as becoming a bystander in his own body. As a benefit, though, the Ruler Skill Wrath raises the user's stats and abilities to the absolute highest values allowed by the System,[8] surpassing even Ariel.[9] He tries as much as possible to refrain from using this skill, as he is unable to regain control without intervention from outside.

When Wrath is under control, he usually has a calm and composed attitude; he always keeps an open mind during conversation and remains empathetic to others' situations, even still, he does not waver in his own world view. He also commands a powerful presence, forcing others to acknowledge him with little effort. Shun describes him as an unstoppable blade when they are first reunited.[10] Unlike when he was Kyouya, he knows that sacrifices are unavoidable to achieve his goals.

As a child, Kyouya had a strong sense of righteousness that often got him into trouble. He was a good fighter and drove off bullies, but was eventually ostracized due to scolding by adults and friendless by the time he had graduated junior high school. He transferred to Heishin High School and was able to endure witnessing some minor bullying of Wakaba and Negishi without fighting because he was able to vent his frustration and anger at games with his friends Shunsuke and Kanata. Still, he died in the explosion along with the rest of the class. Until that moment, it was like any other day.

Wrath's first appearance is during the first Demon Council Meeting, where he is present as the commander of the Eighth Demon Army. He is stoic and quiet, mostly just observing the proceedings and confirming his orders from Ariel. To Balto, he is somewhat of an anomaly among the commanders, along with Merazophis, Shiro, and Kuro.

When Kyouya is reborn in year 840, it is as a goblin named Razu-Razu in the corner of the Mystic Mountains that separates the Renxandt Empire and the Demon Realm. Although confused about the situation, he was not entirely disarrayed due to some books he had borrowed from Kanata. Kyouya doesn't take long to adapt to his situation, and learns a lot by the time he is one year old in the new world. He searches for other reincarnations in the goblin village to no avail, but does learn quite a bit by walking around and listening to the adults. His image of goblins also changes, as they turn out not to be dirty, weak, stupid creatures, but are more like prideful undeveloped tribesman. The need to sacrifice themselves for the survival of the village is something that Razu-Razu had decided transcended the "justice" that he had decided in his previous life. These goblins became his family.

By the time he was two, he understood the paths he could take upon hitting Level 10 in order to expand his lifespan. Fighter, Ranger, and Shaman. After that, it's hobgoblin, and then there is no need for him to worry about lifespan anymore, since Hobgoblins can live to about the same age as humans. It is around this time, when preparing dinner for the village with his dad he discovers his Weapon Creation skill. The elder appraises him with the village appraisal stone and he is put in charge of creating weapons for the village once he gains enough MP and levels in the skill. This skill increases the prosperity of the village a bit by providing them with sharp tools and new weapons.

The next half year goes by uneventfully, but his elder-brother, Raza-Raza, evolves into a hobgoblin. Razu-Razu also loses his first younger sibling to a miscarriage, and Raza-Raza comforts him through his depression. Later, Razu-Razu gains a younger sister that he swears to protect and Raza-Raza became the lead warrior of the village, a High Goblin. Razu-Razu also gains the Naming skill, allowing him to bestow increased stats on items and other living creatures that he names.

Eventually the activity of the goblin village, and their exceedingly good weapons, catches the attention of the local humans. Razu-Razu continues to create weapons and tools for the village, and creates a katana for himself, but the village is attacked. The village falls to the humans and monsters with them. Raza-Raza and Razu-Razu are captured, but not before the leader and monster-tamer known as Buirimus forces Razu-Razu to kill and eat his own sister against his will in an attempt to break him. He gains the Ally-Killer and Kin Eater titles, along with Taboo Level 2, Anger Level 2, and Heresy Magic Level 1. Instead of being broken, his mind is filled with hatred and rage, but his body remains firmly under control of Buirimus.

As a slave, Razu-Razu continues to make weapons against his will and curse the monster-tamer Buirimus. In secret, he trains his body and his stats in order to prepare for the chance that he can break free of the compulsion spell. Eventually, Weapon Creation reaches Level 10 and evolves into Wondrous Weapon Creation, allowing him to imbue effects on the weapons he creates. In order to support the MP required to use this skill, Buirimus orders Razu-Razu to evolve into a Shaman. He also eventually learns the human language and gets information by eavesdropping on the humans.

During his captivity, Razu-Razu finally reaches a breaking point. For years, Razu-Razu held onto his anger and hatred of Buirimus, constantly increasing the level of his Anger skill, until eventually it reaches Rage Level 9. The event that pushes him over the edge, though, is discovering that his brother, Raza-Raza, had been slaughtering goblins in other villages and taking their flower-charms. Raza-Raza had betrayed the goblins and shamelessly laughed alongside Buirimus. And so, Razu-Razu's Rage becomes the Ruler Skill, Wrath. As a Ruler, Razu-Razu is able to break free of Buirimus's control and exact his revenge. Razu-Razu slaughters everyone, starting with his brother, and ending with Buirimus. His final act in that despicable place is to use the Naming skill to change his name to Wrath and evolve into an Ogre, abandoning his pride as a goblin.

Sophia Keren
Kyouya did not interact much with Negishi in their previous lives. Wrath first encountered Sophia while under the influence of his namesake skill, causing him to attack and easily overpower her. Also, he initially did not even recognize her. They had a rematch sometime later, during which he had a much harder time, though he likely still would have won had Shiraori not intervened. Afterward, while Sophia helped seal his skill, they initially continued to have a complicated relationship due to her still holding a grudge. Over the years, though, their relationship improved and they are now on working terms.

Shiraori
Kyouya did not interact much with Wakaba in their previous lives. Wrath first encountered Shiraori while under the influence of his namesake skill, causing him to attack her. However, he backed off when he recognized her as Wakaba, due to them looking identical. During their second encounter, however, she easily defeated and subdued him, allowing his skill to be sealed. Afterward, Shiraori took Wrath in, causing him to feel grateful, though he also had trouble communicating with her due to her introvertedness. He also seemed to have studied under her for her while.

Ariel
Wrath feels grateful to Ariel for taking him in after his namesake skill was sealed, causing him to join the demon military to repay her. He currently serves as one of her demon army commanders and fully supports her plan to destroy the System to save the dying planet, even though the backlash would kill half of humanity.

Filimøs Harrifenas
Ms. Oka was Kyouya's homeroom teacher in their previous lives. Wrath first encountered Filimøs while under the influence of his namesake skill, causing him to attack her. Even though she tried talking to him, he did not recognize her and likely would have killed her had Potimas not fled with her. They encountered each other again after Wrath's skill was sealed, during which she tried to pursue to stop fighting. However, Wrath flat-out shut her down, stating he is acting of his own will and that she is hypocriting as she too has blood on her hands. Overall, the two have an antagonistic relationship due to being on oppossing sides.

As an oni, a high evolution stage for a goblin, Wrath exhibits incredible feats of endurance and strength in battle. Furthermore, being forced to pick the Goblin Shaman at early stage of his life, Wrath has a large pool of MP, allowing him to use magic to amplify his attacks in combat and summon a large arsenal of magic swords which he is able to throw at great distance to cause chaos and destruction when the swords explodes. Having undergo training from the Demon Realm military and experience battles as an army commander, Wrath is a very competent fighter. 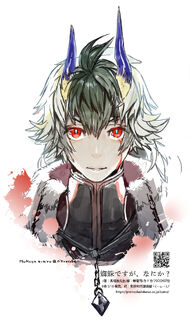 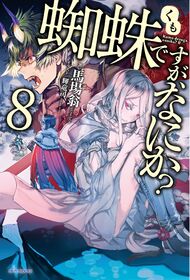 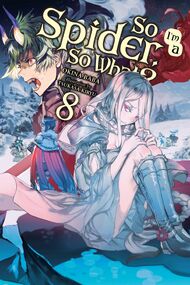 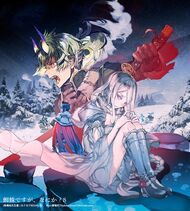 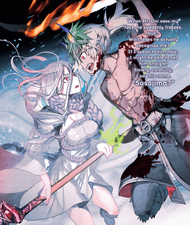 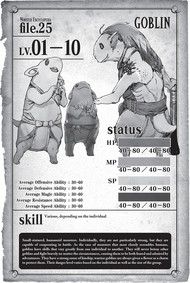 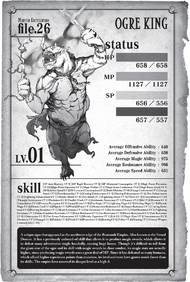 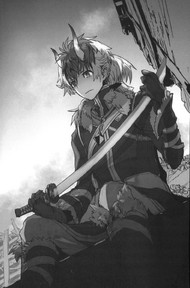 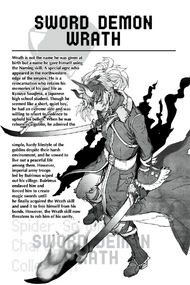 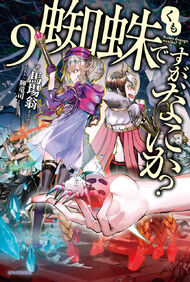 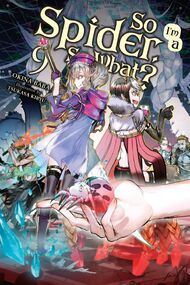 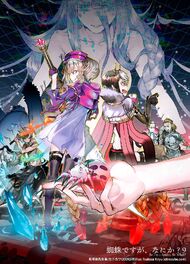 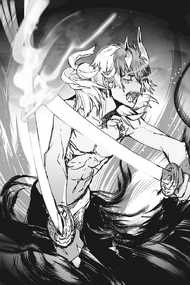 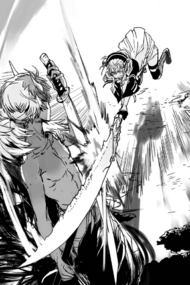 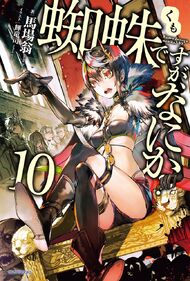 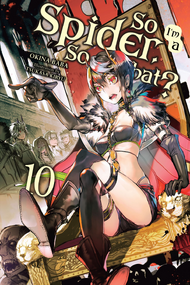 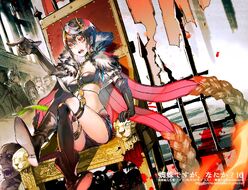 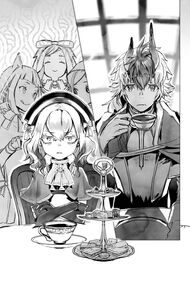 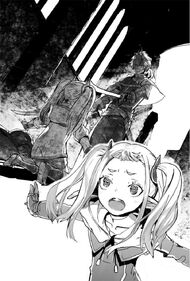 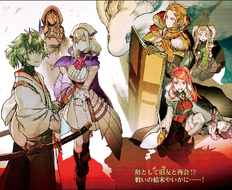 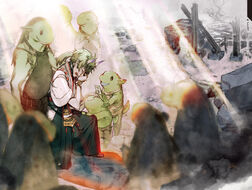 Volume EX
Add a photo to this gallery 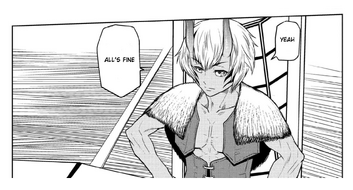 Chapter 29.3
Add a photo to this gallery 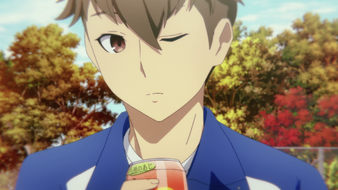 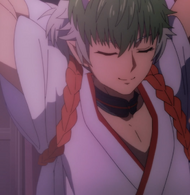 Episode 09
Add a photo to this gallery
Retrieved from "https://kumodesu.fandom.com/wiki/Wrath?oldid=21473"
Community content is available under CC-BY-SA unless otherwise noted.