So I'm a Spider, So What? Wiki
Register
Don't have an account?
Sign In
Advertisement
in: Disambiguations, Characters, Reincarnations

This article is an explanation page for Wakaba

Here we try to explain the topic of Wakaba because it's already covered in multiple articles on the wiki, which can be confusing. Below you should find the topic's explanation and links that should guide you to the related pages.

Wakaba Hiiro (若葉姫色) is one of the students in the classroom that was caught in the mysterious explosion at the beginning of the story.

Despite her unsocial nature, Wakaba Hiiro was described by her classmates as being the "queen" of their school simply due to her great looks. She had long black hair that reached up to her knees, a slim figure, and black eyes.

Despite being revered by others as the "queen" of the school, Wakaba Hiiro is, in fact, a social outcast. She was not a shy person by any means, though, just an unsocial one, not even bothering to interact with her classmates and only speaking the bare minimum required to partake in lessons. Although she got bullied due to her anti-social tendencies, she did not pay much attention to it and her would-be bullies noted that she "saw right through them", not even considering them worth her attention.

Wakaba's loner-lifestyle also applies to her life outside school, spending most of her time inside her room playing video games. She also doesn't have a positive relationship with her parents nor cares much about her nutrition, with her diet consisting of cup ramen and junk food.

Despite her shameless attitude, however, Wakaba does have a sense of pride, being angered when Ooshima Kanata confessed to her whilst fully intending to be rejected.

Wakaba Hiiro was known by her classmates as the "Queen" of the school due to her otherworldly beauty. However, contrary to what one might think of someone with such a title, she was, in fact, a social outcast. She always kept to herself, spending most of her time in class reading while playing video games at home. Her family had also fallen apart and she spends most of her evenings eating alone, her diet consisting mostly of junk-food. Due to this lifestyle, her athleticism is among the lowest in class.

Despite her anti-social tendencies, however, her seeming approachability only made her classmates revere her even more. One of the most popular girls in the class, Shinohara Mirei, eventually began bullying her after she was rejected by her crush because he already had a crush on Wakaba. However, Wakaba did not even consider her would-be bully to be worth her time and just ignored her, which only caused her to pick on her even more.

One of Wakaba's classmates, Ooshima Kanata, once confessed to her and she rejected him. However, she noticed that he was fully aware that he would be turned down and wanted to use the botched attempt to fit in better with the rest of the boys in the class, which left Wakaba feeling bitter.

Filimøs, due to increasing pressure from Karnatia, reveals the Wakaba Hiiro did not survive the ordeal in the new world. This revelation shocked Shun and his friends, especially Feirune, who was hoping that there would be a chance to reconcile and ask for forgiveness. This major reveal shocks the group, showing that not everyone has had such privileged lives as them.

Throughout the series, there were numerous hints that implied that Wakaba Hiiro was one of the possible candidates for Kumoko's past life identity. This was later confirmed in the Elf Village Arc, when a seemingly alive and unscathed Wakaba renders Hugo unconscious and made an appearance to Shun's group. This comes at a great shock to Filimøs and the rest of Shun's party, who assumed she was dead. For Shun, this was a bigger revelation as Wakaba matches the description of his brother's killer.

Major spoilers from volume 9 of the Light Novel onwards, this is your final warning! This is hard to understand without reading the source materials or getting the context beforehand! If your enjoyment gets ruined, it's on you okay?

Having managed to escape the system and reaching the status of a god, Kumoko now known as Shiraori began to experiment with dimensional magic, as a possible means to escape this troublesome world. Once she successfully testing her new abilities of dimensional travel. Kumoko made an attempt to teleport to Earth and visit the hideout of D, hoping to get more answers.

It was here it was revealed to the readers, that Kumoko was not the real Wakaba Hiiro. She only took on her appearance and memories due to D's intervention at the beginning of the story. "Wakaba Hiiro" was a false identity created by D, which she used it to masquerade as a high schooler to escape her responsibilities as a god and enjoy a life on Earth.

One day, the class was struck by a mysterious explosion that killed everyone except Wakaba Hiiro. In reality, the explosion was the result of combined a magical attack from a previous Hero and Demon Lord to assassinate Wakaba, viewing her as the cause for their world's plight. Feeling responsible for her classmates and teacher dying in the crossfire, and thinking it would be fun, she collected their souls and reincarnated them.

However, all her classmates dying and being reincarnated would likely draw the attention of fellow gods, and Wakaba Hiiro not being amongst them would surely lead to D being discovered. Therefore, she decided to misdirect them by giving the piece of her soul that was Wakaba Hiiro, with all her memories of her time on Earth, to a spider that happened to be in the classroom at the time, resulting in the creation of Kumoko. Also, to make sure the other reincarnates wouldn't notice her absence, she messed with Filimøs' Student Roster skill by having it connected to Kumoko.

After creating Kumoko by fusing the part of her soul that was Wakaba Hiiro with a spider, D reincarnated her in the Great Elroe Labyrinth and expected her to quickly die off, taking the evidence of D's time on earth with her. However, she instead continued to survive and take on an appearance that is a combination of Wakaba Hiiro and her spider form following her after evolving into an Arachne and Shiraori.

Kumoko who was just named Shiraori, was greatly displeased to learn her memories were fake and she was originally just a disposable character.

Shinohara Mirei
One of Wakaba's classmates. Shinohara began bullying her after she was rejected by her crush due to him already having a crush on Wakaba himself. However despite the repeated harassment Shinohara would inflict on her, Wakaba gave a little-to-no response to Shinohara's actions, not even considering her would-be bully worth her attention. This attitude was noted to have only further enraged Shnohara, as it made her feel even more inferior to her.

Ooshima Kanata
One of Wakaba's classmates. He once made a half-hearted confession to her in hopes of her turning him down and allowing him to use it to better fit in with the boys in his class. While Wakaba did exactly as Ooshima expected, she also noticed his intention and it left her feeling bitter at being used.

Yamada Shunsuke
One of Wakaba's classmates. While they never really interacted in real life, they did party up online on one occasion, though neither knew who the other was. 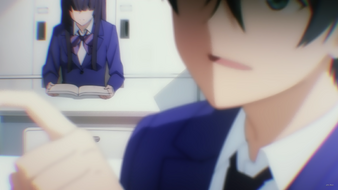 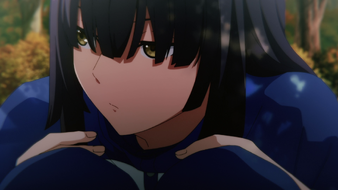 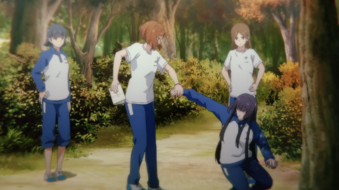