So I'm a Spider, So What? Wiki
Register
Don't have an account?
Sign In
Advertisement
in: To Do, Monsters, Spider

Later, after Kumoko initiated a mental attack on "Mother" to cancel the effects of her Kin-Control, the Queen Taratect send several of her offspring, including multiple normal Taratects, to eliminate her. However, they were all killed by the rogue Taratect. 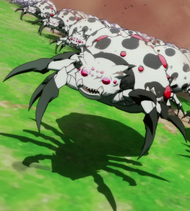