So I'm a Spider, So What? Wiki
Register
Don't have an account?
Sign In
Advertisement
in: To Do, Monsters, Wyrm, Summons

Suiten is an amphibious water wyrm that Looks like a green pufferfish. It can be found in the ocean. Suitens possesses poisonous organs, that if properly removed Suiten tastes good.

A Suiten was tamed by Buirimus, but was killed when he summoned it to fight the Nightmare of the Labyrinth. 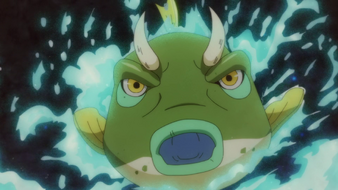 Suiten possess the ability to use Water Breath and Deadly Poison Attack LV4.