5-S3: The Battle of the Elf Village Begins

The Pope and the Ninja

Season 1 | Episode 20
Sajin, formerly Kusama Shinobu (草間忍), is one of the reincarnated from Japan. He works as a ninja/dark ops for pope Dustin LXI.

Born to a family that serves in the dark ops of Holy Kingdom of Alleius. Due to that connection, the pope noticed that he had a strange skill shortly after birth, and he became the trigger for the existence of the reincarnations being known about. After his birth, he participated in the dark ops training, distinguishing himself due to the influence of the unique Ninja skill he was born with. But, because he had an easy-going nature from the start he is fatally ill-suited to the dark ops – a regrettable ninja. In his previous life he was treated like a gofer due to his easy-going nature. Even now he’s acting like the pope’s gofer, so there’s not much difference. 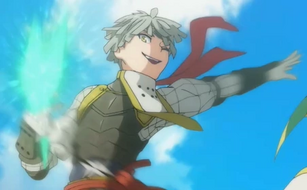 Anime
Add a photo to this gallery
Retrieved from "https://kumodesu.fandom.com/wiki/Sajin?oldid=22297"
Community content is available under CC-BY-SA unless otherwise noted.