So I'm a Spider, So What? Wiki
Register
Don't have an account?
Sign In
Advertisement
in: Characters, Natives, Elf Faction, Rulers

Potimas Harrifenas (ポティマス) is the patriarch of the Elves. Initially presented as a supporting character in the prolepsis, where helped Filimøs search for her students, it is revealed in the main storyline that he is actually the main antagonist of the series; a mad scientist obsessed with immortality.

Potimas appears as a standard fantasy elf, he has blue eyes and a long blond hair tied as a ponytail.

The chief of the elves, he holds complete authority over his race. He is the father of Filimos, also known as Ms. Oka, a reincarnation. In accordance with her wishes, he sets out to gather the other reincarnations and protect them. This is not due to the goodness of his heart, however, but rather in accordance with his own motives. He thinks of all other elves as nothing more than pawns. Potimas is not simply their leader; in his mind, it is no exaggeration to say that the entire race of elves exists solely for him to use as he wishes. What he intends to do with them is known to no one but himself.

He is a control freak and a narcissist, absolutely obsessed with obtaining Immortality. This obsession has driven all of his actions since before he was 10 years old. It is this diligence towards this goal that earned him the skill Diligence and the title Ruler of Diligence[1], but also twisted him into a sociopath. He cares not for the living creatures he creates, always throwing them away if he no longer has a use for them or if they become a burden to him.

As noted by Ariel, due to his vindictiveness', stubbornness and immense selfishness, Potimas's overall mentality itself was comparable to nothing more than spoiled child that never grew up. An assessment that was confirmed by Ariel, Dustin and Güliedistodiez after centuries of observing and fighting against him.

Potimas is shown to be supremely self-centered and arrogant and has a habit of constantly overestimating himself and what he is capable off while constantly underestimating his enemies. This is noted to be one of his most prevailing traits and one of his most obvious and major weak-points that has been repeatedly exploited by his many enemies numerous times during their many confrontation against each other.

Potimas first appeared along with his daughter Filimøs during a political meeting with the King of the Kingdom of Analeit. While he's at the castle he encountered Shun and Katia.

Potimas is the Ruler of Diligence, and has survived since before the System was put into operation. Being entirely focused on not wanting to die, he threw the world into a maelstrom of chaos. Both a genius and a natural calamity, he evolved himself into a new species known as the elves, and is continuing his research in order to achieve true perpetual youth and longevity. After the System was put into operation he was threatened by Gyurie to behave himself, and being frightened of that he shut himself inside the barrier. Even so, he got up to various things behind the scenes leading to the current situation.

From the moment he was first aware, Potimas has been terrified of death. In ancient times, he is a world-famous researcher who got involved in every field of science in his search for a means for survival. Sensing the limits of conventional science, he seeks to understand the magecraft by which the dragons of the world performed supernatural feats.[2]

To do this, he induces a criminal organisation to abduct an infant dragon. From the few tests that were able to be done before the infant was rescued, he was able to conclude that there must be rules behind the action of magecraft. After years of diligent research, he discovered a technique for drawing the world's MA Energy.[3]

Using MA Energy, Potimas creates vampires, rogue forms of creatures modified through a type of magecraft, which had been hunted into extinction by the dragons and Sariel. While the vampires are immortal, they also lose their sanity, so Potimas doesn't choose to apply the procedure to himself. While searching for a way to preserve the sense of self, his institute was exposed, forcing him to flee and causing a vampire outbreak.[4]

He releases his MA-drawing technique to the world, claiming that it is an unlimited source of energy, as well as the fruits of his research into vampirism and chimera, a technique that extends a human's life expectancy by threefold. Despite being a wanted criminal, MA Energy and evolution became widely used.[5] He also disseminates designs for anti-god weapons to many of the world's militaries.

While pressured by the ongoing eradication of humanity by dragons, Potimas succeeds in evolving himself into an immortal race that is later known as elves.[6]

After the dragons take most of the remaining MA Energy in their departure, Potimas intends to escape the dying planet. Knowing that he would struggle to survive off planet, he devises a plan to decompose Sariel and reform her energy into a weapon design that would come to be called Gloria Ω.[7] However, the moment Sariel steps into the decomposition equipment, Gyurie proclaims the beginning of the System.

Filimøs
Uses her in order to collect reincarnations, but they don't really have a father-daughter relationship. He doesn't tell her that he uses clones and therefore is not dead when he dies.[8] As revealed in his inner thoughts, Potimas looks down on his daughter due to how easy it is for him and his subordinates to manipulate her for their own ends without much difficulty by simply mentioning the other reincarnates. In Potimas's view of Oka, he only ever considers her to be another pawn in his ambition to become truly immortal and only has a slightly higher opinion of her due to her being more useful to him in comparison to the other elves. Albeit its also been shown that Potimas's himself is perfectly fine with sacrificing her if the situation calls for it. Potimas has stated to actively see and treat Oka as a child despite her technically being the oldest of the reincarnates as in his opinion, in comparison to the 30's years lived in her previous life and the 16 years she lived in her seconds life, she is still only a child by the standards of the incredibly long lived elf race.

Elves
Potimas is the creator of the Elf Species. In his quest to obtain eternal life, Potimas engineered the elf race as part of his endeavors to find the secrets of immortality, creating a race possessing incredibly long lifespans as a by product of his efforts. Since their creation, Potimas has reigned as their leader since ancient times ever since the System was first established, with him using them as his personal forces and subordinates to help him in his goals of finding immortality and helping him fend off his enemies. However despite the elf race's unwavering loyalty towards him, Potimas has not once developed even a slight level of care or attachment for his race and considers them nothing more than disposable pawns in his overall plans. Overall, his highest opinion of them was their additional usage to him off being spare bodies that his soul could inhabit for his plans. As seen from his general interactions with them, Potimas constantly belittles his elf subordinates and mainly considers them nuisances when they do not comply with his orders fast enough and generally treats them as being beneath him until he has some sort of use for them. He actively de-humanizes them in his inner thought by referring to them as "Disposable Products" and "Expendables".

That Creature
Considers her attack on the elves to be a good opportunity to settle an old grudge.[9]

Kumoko
Potimas first learned of Kumoko from her repeatedly thwarting the elves' effort to kidnap Sophia and declared she would pay for getting in his way. They had their first fight not long after, when he decided to personally kidnap Sophia, during which he likely would have killed her had Ariel not interfered.

Potimas Harrifenas has extraordinary intelligence, displaying mastery in numerous disciplines, such as biology, engineering and physics. Allowing him to create large number of cyborg clones made using a combination of science and magecraft.[10] A captured clone was found to have been made using magecraft to enhance its hardness and maneuverability, in addition to some small prepared magecraft invocations. These abilities were probably developed using System Skills as the starting point, and would have defensive status values of approximately 10,000. The clone was found to be at least 800 years old.[11]

Despite normally disdaining the System and preferring not to use the powers and abilities offered by it, Potimas has been shown to possess at least a few abilities from the system. 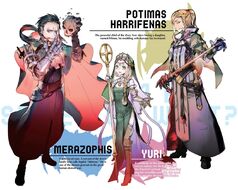 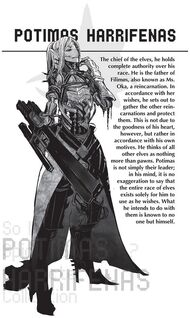 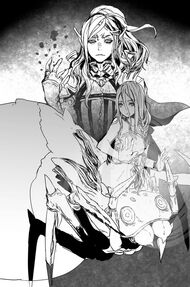 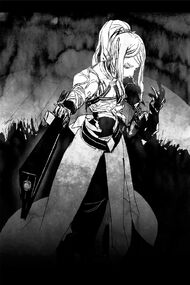 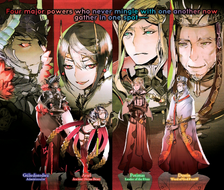 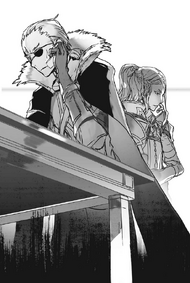 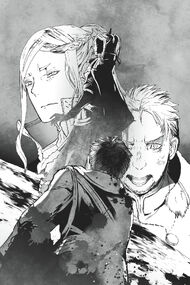 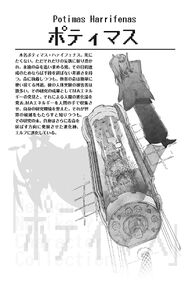