I've finally figured out why I was reborn in this world. Still, that doesn't mean I'm gonna change how I live day to day right away. For now, what's most important to me is regaining my strength and gaining some new skills. That's why I sent out thousands of spiders all around the world to keep an eye on things. I have more talent for being a spy than I thought... Source: Yen Press

Y'know...understanding the reason for your existence, learning the ultimate truth of the world, and attaining godhood would give most people a lot to think about. But me? I've got better things to do, like making mini-spider clones! Look at this one-isn't she precious?! There's a LOT more where she came from, and I've sent them all over the world to act as my eyes and ears. I bet the Demon Lord will find the info I've gathered super useful for dealing with the impending demonic rebellion.

Oh, did I not mention that before...? 'Cause that's totally a thing. 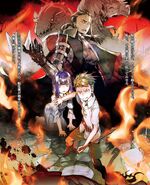 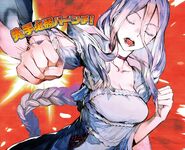 Sophia and Wrath have tea

Sophia is angry with Shiraori

Oka defends a spider from being squashed in her classroom