So I'm a Spider, So What? Wiki
Register
Don't have an account?
Sign In
Advertisement
in: Monsters, Wyrm, Great Elroe Labyrinth

An evolution of a Fenerush which favours pure strength. It resembles a tyrannosaur as it stands on two legs, freeing up its arms for use as weapons.[1] It is a powerful monster in the Upper Stratum of the Great Elroe Labyrinth, roughly equivalent to an Elroe Gunerave.[2]

Kumoko's prey: A wyrm comparable in strength to an eel, with high SP.[2] Its corpse was discovered by the group of knights led by Goyef.[3]

Fei's parent: Contracted to a criminal summoner, but broke free when summoned to the academy. Had stats of around 2,000, the Imperial Scales skill, and a breath ability. Looked like a dinosaur with sharp nails and a log-sized tail.Note that this individual is never confirmed to be a Fenerush, and could be its evolution instead.[5] 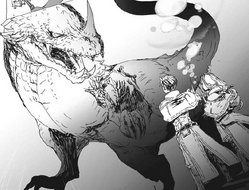 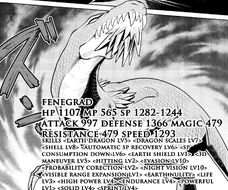 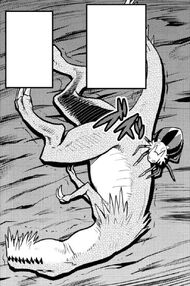 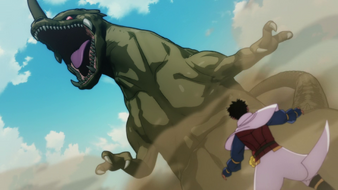