So I'm a Spider, So What? Wiki
Register
Don't have an account?
Sign In
Advertisement
in: Monsters, Great Elroe Labyrinth, Insect

Weak centipede-like monsters who rely on numbers to hunt their prey, this species use a paralyzing poison to immobilize their prey. They can be found in the Upper Stratum of the Great Elroe Labyrinth.

Also known as a centipede. An insect-type monster with a multitude of legs. Most of its stats are very low with the exception of its speed, which is abnormally high. However, despite being endemic to the Great Elroe Labyrinth, this monster lacks the Night Vision skill, making it possible to easily dispatch solitary specimens. The one truly frightening aspect of these monsters is their tendency to appear in large numbers and function as a colony. A single ferect's danger level is F, but a colony can reach level B. 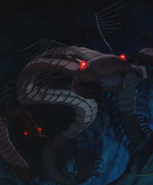