So I'm a Spider, So What? Wiki
Register
Don't have an account?
Sign In
Advertisement
in: To Do, Characters, Natives,
and 2 more

Aurel Stadt is an imperial court wizard. Second only to Ronandt in magic ability among the humans, and Ronandt’s Apprentice No.2. She was originally the daughter of a low-ranking noble.[1]

The youngest daughter of a relatively poor noble family that resides in a rural part of the Renxandt Empire. She was sent away from home under the pretext of learning housework so that she could have a chance to marry into a richer family, but she initially had difficulty finding employment because of her crass mannerisms. That was when Ronandt happened upon her. Aside from her rudeness, she's actually a rather intelligent and talented young woman. The problem is that she has no intention of reforming her behavior. An impudent girl, she has the nerve to be blunt even with her employer. She and the eccentric Ronandt make for a bit of an odd combination, but they seem to get along, which is why she often puts up with Ronandt's strange whims.

Aurel originally entered Ronandt’s service as an attendant, but became an apprentice before she noticed and became an imperial court wizard before she noticed.[1] She fought in the battle against Merazophis, providing supporting fire to Asaka and Kunihiko.[2] 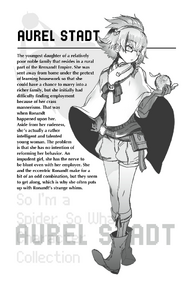 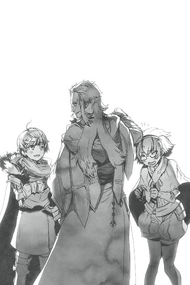