Black with some white strokes

B1: The Demon King's Close Aide Lets Out a Sigh at the Conference

The Origin Taratect, Ancient Divine Beast, Ruler of Gluttony and current Demon Lord. She is the progenitor of all Taratects in the System, and thus all spiders can be considered her kin.

Ariel appears no different than regular human, though she looks like she is in her early-teens. She has short black hair, with a pure white strip on her bangs. Her skin is a light, healthy tone and her eyes are an unnatural red. Despite appearances, she is one of the oldest beings on the planet.

She wears a tube-top and hot-pants outfit, adorned with straps around her waist and legs. Along her back is a stripped cape with a high-fur collar. This cape has eight strips which represent her spider-like nature and which she can control by using her thread Skill.

Not much is known of Ariel's personality before her soul was attacked by Kumoko's Parallel Mind named Body Brain. During the battle with Earth Dragon Gakia, Ariel's soul melded with the Parallel Mind; in consequence, Ariel ended up retaining the wills and personalities of two individuals blended into one.[1]

Ariel has a strong, independent personality, but also cares deeply for her kin. She was enraged beyond reason when the Queen Taratect of the Great Elroe Labyrinth was killed by Kumoko, leading the the deaths of many Earth Dragons that fought her, including Earth Dragon Gakia, the leader of the dragons in the Great Elroe Labyrinth. Afterwards, she felt that her soul had melded with Kumoko's, resulting in a more easy-going personality and gaining certain principles, such as never leaving leftovers behind.[1] She was still able to retain much of her original sense of self as a mature, serious individual.

During her travels with Kumoko, Sophia, and Merazophis, she is shown to be able to read people with extreme scrutiny, constantly pinpointing the emotional struggles Sophia and Mera are dealing with and offering advice on how to deal with personal or relationship issues they are having, as well as reading their thoughts from nothing but gaze alone.[2][3] This advice, though, is blunt. Ariel herself is also extremely blunt about her motives: she is not nice for the sake of being nice. Her advice to Sophia and Mera is partly out of sympathy, but also to benefit herself; she states that getting on Kumoko's, now named White, good side is her goal for helping them.[2]

Both Sophia and Merazophis reason that Ariel is truly helping them out of her own heart, though, due to how petty she is with White; constantly goading her due to their complicated relationship and the grudge she has against White for killing so many of her close kin. It can be reasoned that Ariel does not reveal her true motives easily, but is actually a kind and caring individual to those she considers family or friends.[2] She is even willing to be the guardian of these children, comparatively speaking, struggling with their emotions. She has a strong sense of responsibility, clearly stating that an adult is one that is needed to explain to children the correct choices in any given situation and why those choices are the correct ones. [4]

On the other side of the coin, she is absolutely ruthless towards her enemies, offering no sympathy whatsoever, and completely devouring everything that stands in her way.[1][5] In her battle with Kumoko, before Mother's death, Ariel didn't hesitate to completely obliterate Kumoko once she understood that they where enemies.[5][6]

Over the course of their travels together, Ariel eventually parts ways with her grudge against White, indicating that she is a rather forgiving person, as well. White often refers to her as a true saint, one who automatically thinks about the wellbeing of others before themselves. This is mentioned when Ariel decides to save Sael from the tank in the hidden underground facility.[7]

Ariel's first appearance is from the perspective of Balto. She is rather nonchalant and disrespectful to the Demon Army Commanders, and forces her work onto Balto, who guides the meeting. When two of the commanders begin to fight, she displays a bit of her power, literally forcing them to sit down with a unique skill application.[8]

Her next appearance is after the conclusion of the Human-Demon Great War, where she picks up the Hero's scarf and shows it to Shiro before enchanting it with magic and leaving it for the humans to find.[9]

Both of these events occur before her chronological appearance in the story, where she first meets and engages Kumoko after Mother calls for Ariel's aid. Mother's soul is being devoured by Kumoko's Parallel Wills, so Ariel comes to stop her. Due to language difficulties, negotiations break down. Kumoko is obliterated by Ariel's strength.[6] To Ariel's surprise, the attack on the queen taratect's soul does not subside, and she eventually realizes that the Zana Horowa she thought dead is very much alive.[10] She spreads out her puppet taratects to find and engage Kumoko, who is using Spatial Magic to keep Ariel and her forces at a disadvantage. The puppets are defeated through underhanded tactics such as drowning, forcing Ariel to tighten their formation around her so she does not lose any more. Ariel is unable to find and destroy Kumoko before she finishes consuming the queen's soul.[11]

Ariel's fourth appearance is on the back of an arch taratect, on the journey to the elf village. She is eager to crush the elves, but says she will act with enough restraint to not hurt the reincarnations.[12]

Kumoko
Ariel first learned of Kumoko when "Mother" send an S.O.S. that she was attacking her soul. Upon confronting her, she requested her to cease her actions, which she did not understand due to the language barrier. Her request seemingly denied, and judging her to be too dangerous, Ariel attacked Kumoko and seemingly killed her. However, she survived and Ariel send pursuers. Unfortunately, Kumoko defeated not only them but also "mother" herself, causing Ariel to vow vengeance. At the same time, Kumoko attacked Ariel's soul as well, causing her to learn about her past. Requesting assistance from Güliedistrodiez, Ariel launched a surprise attack on Kumoko by teleporting to her location. However, Kumoko survived once again by transferring her soul into her offspring. Ultimately, with neither able to defeat the other, Ariel proposed a ceasefire, which Kumoko accepted.
Ariel initially intended to use their ceasefire to find a way to either control Kumoko or kill her permanently. To this end, she attempted to tame her by giving her a name, Shiro (or White), but this had no effect at all. In fact, Shiro actually managed to win over some of Ariel's own forces. Even after learning the key to Shiro's immortality, she was forced to give up on revenge as it would be nigh impossible to destroy all her offspring. After this, though, the two finally began to bond as they laid their grievances bare and both ended up saving the others' life during the battle with G-Fleet.
Spoilers for Light Novel Volume 7 and beyond
Exactly how much Ariel had grown to care for Shiro is on full display in how she protected her following her evolution into Shiraori, rather than taking advantage of her initially weakened state. After finally making it back to the demon country, Shiraori became Ariel's most trusted associate and proved instrumental in turning the tide of the shadow-war against the Elves in her favor. Overall, Ariel concluded that she made the right choice in recruiting Shiraori, as she not only gained a loyal follower but also a granddaugther.

The oldest Divine Beast, the Demon Lord, and the Ruler of Gluttony. She is actually the Origin Taratect, the progenitor of the entire taratect spider-monster species, All taratects are her kin and offspring, directly descended from her, and their souls are connected to her. However, one of her offspring turned out to be a reincarnation from another world and rebelled against her. This individual used their mutual connection to launch an unprecedented attack directly on Ariel's soul. Her efforts to resist led to them essentially devouring each other's souls, until they began to merge together.

Ariel is one of the strongest and oldest beings on the planet, many of her skills have reached to their highest levels. 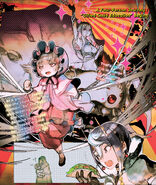 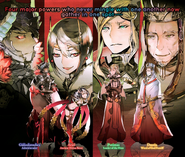 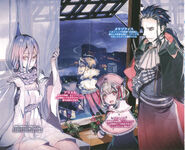 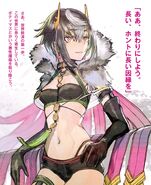 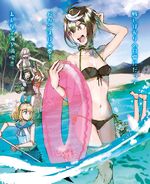 Ariel from an illustration done by Kiryuu in the manga 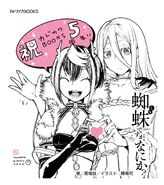 Add a photo to this gallery

Ariel in the Anime Adaption

Ariel in Episode 9
Add a photo to this gallery

Original Art by /u/splasha545
Add a photo to this gallery
Retrieved from "https://kumodesu.fandom.com/wiki/Ariel?oldid=18519"
Community content is available under CC-BY-SA unless otherwise noted.