This article is a stub. You can help So I'm a Spider, So What? Wiki by expanding it.

Ael is one of the Puppet Taratect sisters that join White, Ariel, Sophia, and Merazophis on their journey to the Demon Realm. Ael acts as the eldest to her sisters, acting as a role model and example to the others.

Ael's appearance is that of a young girl with slightly spoofed short hair. She wears a high bow on her head, reminiscent of bunny-ears. For clothes, White fashioned an outfit that looks a like a mix between a shrine maiden and Japanese school outfit, but the sleeves are extra wide to fit her six arms. She also wears a pleated skirt that ends just above her knees.

Ael acts as an example for her sisters. She is often the most adventurous and least shy. Her sisters tend to look towards her for learning, and she is also responsible for reprimanding them when they behave inappropriately. Sometimes she gets tired of looking after them, so she will do things that the others will follow in order to distract them for a bit so she can take a break, such as climbing onto White for a piggy-back ride; this essentially off-hands her normal responsibilities to White, much to White's chagrin. 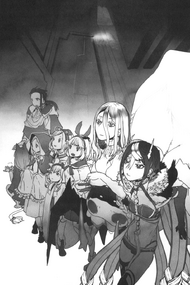 All sisters Vol 7
Add a photo to this gallery
Retrieved from "https://kumodesu.fandom.com/wiki/Ael?oldid=22388"
Community content is available under CC-BY-SA unless otherwise noted.